I was studying photos from the recent news story about Vice-President Dick Cheney accidentally shooting a fellow hunter and I think the mainstream media is not asking enough questions. 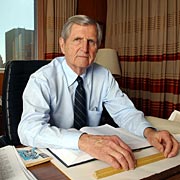 Look at this photo closely. Notice anything? That's right! Charles Whittington has the largest right hand you have ever seen. I understand that in Texas, they're famous for makin' em big, but why SO big? Why so much larger than his normal, 3-fingered left hand? Wouldn't this right hand seem ideal for blocking several hundred bird-shot pellets?

Uncanny Tex-man: Due to relaxed* EPA regulations, public water supplies near to Mr. Whittington's home have become polluted, causing Whittington to slowly develop a genetic mutation. After spending an afternoon together, Mr. Cheney decided that Whittington's mutant powers were not psychic, psionic, telekinetic nor any type of biologically generated laser. However, the hand could potentially point attention (via 12-inch index finger) to the current EPA's innefective state. Some say that Cheney decided then and there, that this republican lawyer had to disappear. And quietly.

Heavy Palm and her Five Sisters: Was Whittington simply too weak to lift up and block his face with this enormous hand? Had Cheney used the hunting trip as a ruse to drug or hypnotize Whittington in the same fashion as he had with Justice Scalia years earlier? What reason would there be for slipping Whittington a 'roophie'? Is there evidence to indicate that Whittington had rebuffed Cheney's romantic advances?

Elephantitus! : Why has the hospital been so secretive about releasing photos or video of the accident victim? It is possible, some say, that as large as Whittington's right hand appears, his right foot and testicle are substantially larger, and therefore more difficult to move. As Cheney turned to take the shot, was Whittington simply too overwhelmed by his ballooning limbs and privates to safely clear the area of danger?

Birdman, Attorney At Law: Some believe Whittington's thin, nordic nose and enormous flapping hand caused Cheney to mistake him for a quail. This theory seems unlikely until one considers that most of the birds that the VP were hunting are often less lively than a frozen oven-stuffer rooster. In such a hunting situation, any "moving" object is considered a grave threat and is aggressively pursued.

*relaxed is a newsy word which means 'unconscious', 'neutered'; in the case of a business, agency or other organization it can also mean 'staffed entirely by employees who spend all day looking at ebay'.
Posted by abnormalbrain on 10:17:00 AM