After I started using my Macbook Pro, I discovered that unlike on my G4, Illustrator now had a habit of saving extra files in some phantom, haphazard attempt at an auto-save. These files are occasionally useful, but I usually discard them at the end of a project. I still haven't investigated where they come from.

Now, because they occur randomly, and because I work randomly, there is almost never any cohesion between the files. It would be nice, but this autosaving never produces a good record of the building of an image. Until today.

After finishing up my new 12x36" First Friday poster, I went to delete the autosave files. I realized that since I'd done most of the work today, the autosave had operating at pretty regular intervals. I opened them up in sequence, and there it was! Click here to check out the process for the new poster...

Doing a bit of photo research, I stumbled across this...wow. 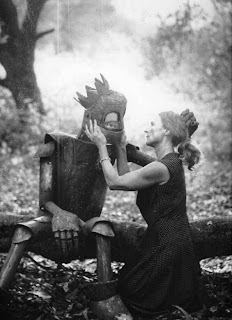 this image is the very definition of the direction i have been wanting to take my work...wow.
Posted by abnormalbrain on 8:52:00 AM 1 comment:

Nothing concrete yet, but I had a good weekend.

I rarely post work from paid jobs, but I might as well...here's a few goofy spot illustrations from today...