It's no secret and I don't care who knows it, I support full-strength health care reform. Regardless of that, I've been hearing about these town hall protesters who show up, throw the words 'Nazi', 'concentration camp' and 'death panel' etc etc around. They yell and scream so no one else gets a word in, especially the congressfolks who they just screamed questions at. So I went to Rep. Niki Tsongas' town hall out in Hudson, MA. For the most part the crowd seemed 50/50, supportive vs unsupportive. No one was too much of a shouter.

Tsongas handled it all well, even if her answers were a little more complicated than folks had the appetite for. Also, she was caught in the middle. When I say 50/50, I mean half wanted single-payer, and half just wanted to yell 'fuck you'. Tsongas' position is for the public option, which sits somewhere in between those two sentiments.

The meeting overall was a snooze. The answers were complex and the crowd would start to squirm about 30 seconds into each answer. My take is that the shouters have self-defeated. TV has shown them in action, and the silent majority seems to have finally shown up. Once they don't feel like they can bully the whole place, they don't. References were made to the Chelmsford meeting being a real mess and that Rep Tsongas was pretty brave for showing up to this one. Maybe the bullies had a chance to go home and think about their behavior. Tsongas was brave, and the bullies as usual, were not.

Something odd that I did notice, two of the loudest guys in the room were behind me. They were kinda loud, kinda stupid, more like juveniles trying to make each other laugh in church. They weren't paying attention, as the even wore on, they'd clap at the wrong times, yell in support of the wrong issues. Whatever. The thing I noticed happening was that when they were hollering, an aide went over and stood by them, she was young, nice, and was engaging them in conversation, answering questions in an informative, non-confrontational way. The tone was as if she were giving street directions to a lost driver. This defused them quite a bit. Interesting, I can't tell if it was intentional or not.

I went just to take photos and clap and collect propaganda, just to observe, after all, I am not a voter in this district. I refused to engage in any conversation...Though I did yell out a Nelson Muntz 'Ha-Ha' when one of the questioners had to invent his own 'real' number of the nation's uninsured. He was adamant that that 46 million number was hogwash. Someone pressed him what he thought it was, and he replied "...um ...5 to 10 million." Maybe I should have yelled "Only".

Regardless, here's my spoils. We did have a bunch of these. 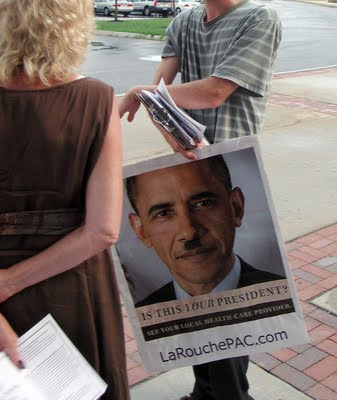 Strangely enough, most of the guys handing the Nazi propaganda out were black. I'm not sure I get that. The area is very white.

I was quite alarmed when they gave me this!

I didn't know those two palled around!


Oh wait, it's fake, and now that I think of it, I have Photoshop too!

And oh, my goodness!

I really could go all day.

Then there was this guy. I do appreciate the street-theatre make-ya-think protesters.

He handed me this:

And just to be fair with the Photoshop:

Wow, you can do ANYTHING with this program! Look at my busted battery from my earlier blogpost!

You know I was listening to WTKK all day and all I heard was that Democratic Congressman/Women were calling the "mobs" Nazis. I tend to believe everything that those smart radio people say. So I think you should delete this post because obviously the signs that you took photos of (and hundreds from other rally's) portrait Pres Obama as the Nazi were completely fabricated by the main stream media and hard left socialists to confuse people. The "mobs" are the ones having there god given rights taken away from them because they are not allowed to shout dis information about a program they have absolutely no idea about. Instead of reading and coming up with a possible alternative for discussion and debate it is our patriotic right to be able to scream what ever Glen Beck and Rush tell us. I am surprised you didn't fill the rest of your page trashing the guy at the Obama town hall in NH who brought a gun and had his rights taken away by being detained. What is this country becoming when you can't bring a gun to an event featuring the President of The United States? Why do you hate America and Kittens?

LaRouche is an interesting dude and he actually supports health care reform. In fact, the Communist Party of American (cpusa.org) has a message to Obama supporters to take to the streets to get the reform done.

I'd say these people were there to spread the belief that the majority of people who attend these events are everything that anonymous believes them to be (ala Glenn Beck, etc).

Thanks for going and giving the run down, Derek! Sounds like a real fun time...like going to a Selectmen's Meeting in Leicester.

By the way, I hate kittens because they shit and pee all over the place...and smell like fish...and not the good sashimi kind.

Actually, one of the guys from the group said (on the Q&A mic) that the health care reforms would cause mass deaths and that Niki Tsongas didn't care because she couldn't see the bodies pile up like in the nazi death camps.

That's a paraphrase. I wish I could have quoted him directly here, but I just reviewed the long, 99.999% boring video I took at the event, but I don't have video of that guy asking that question.

This group was >not< clear that they were in favor of health reform, until I got home and reviewed the materials and saw that they want to end HMO's.

Throwing around photoshopped pictures of Obama with Nazis is probably the worst method of getting your message out. It is the very definition of repulsive, in that it repels everyone, including those that might agree with their aims. Whatever they may want, this is offensiveness for offensiveness' sake.

I'm all for offensiveness for offensiveness' sake (last week I sat through John Waters' Pink Flamingos, uhg), but with this method the group isolates and ostracizes itself. The method is therefore a foolish waste of effort.